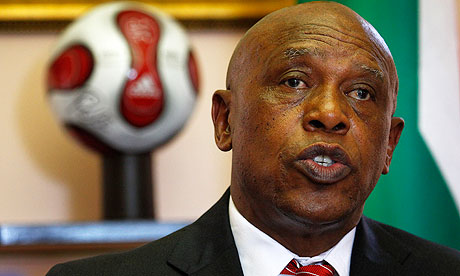 This decision comes after serious deliberation within the activist community and after several failed attempts to meet with Sexwale.

FIFA has delayed in taking action against the Israel Football Association and its violation of FIFA statues. Instead of acting, FIFA has continuously delayed and Sexwale is part of this delaying process. Sexwale and the FIFA Israel Palestine Monitoring Committee was meant to deliver justice, instead, it is delaying justice.

FIFA, in the interests of Israel’s illegal occupation and apartheid policies, has effectively refused to abide by its own rules and in the process displayed utter disregard for international law. FIFA statues are clear with regards to territorial matters when it comes to football associations; Article 72 (2):” Member associations and their clubs may not play on the territory of another member association without the latter’s approval.” FIFA has continued to allow the Israeli Football Association to field games on Occupied Palestinian Territories and include seven Israeli settlements teams. Furthermore, the continued inclusion of the Israeli settlement teams means that FIFA is willingly and consciously participating in unlawful activity.

We are calling, firstly, for Tokyo Sexwale’s resignation. Secondly, we are calling for the FIFA Israel Palestine Monitoring Committee that Sexwale heads to be dissolved. And, thirdly, we are calling on the UN Human Rights Council to add FIFA to the list of corporations involved in the illegal Israeli settlements.

We trust that Tokyo Sexwale will do the dignified thing and resign to prevent damaging his reputation further.

The above call was made on the 26th of October 2017, a day ahead of FIFA’s Council meeting taking place in India.

The call was issued by an initial group of signatories including the South African Jews for a Free Palestine (SAJFP), the Muslim Judicial Council of South Africa and the Christian ecumenical group, Kairos Southern Africa. The statement is also backed by Benoni Spurs Football Club, various student groups and the National Coalition 4 Palestine (NC4P), an umbrella body of over 40 South African organizations.

FIFA had previously expelled Apartheid South Africa in 1961 over its policies. For over two years now the Palestinian Football Association, Human Rights Watch, European Parliamentarians, the UN Special Advisor on Sport for Development and Peace and thousands of football players, fans and activists have been urging FIFA to follow its own rules and ensure that football teams based in illegal Israeli settlements are excluded from the Israeli Football Association. The red card Israel campaign has asked FIFA to suspend the Israeli Football Association (IFA) because of its refusal to comply with FIFA rules. Pressure is mounting but FIFA is delaying and failing to act (click here for an infographic on FIFA’s delay tactics). Activists did meet with Sexwale once in 2016 but since then he has refused to answer emails and letters.

Palestinians have long been complaining to FIFA about Israeli attacks against Palestinian players including arrests and torture of Palestinian athletes, denial of freedom of movement, and bombing of their football stadiums. This is in addition to Israel’s routine (and still ongoing) disruption of Palestinian efforts to import necessary football equipment. Racism is rampant in Israeli football with violent anti-Palestinian racism with Israeli clubs and fans notoriously chanting “Death to the Arabs” at soccer matches.

According to media reports, in a recent pre-recorded video at an event in Cape Town, Tokyo Sexwale reduced Israel’s illegal occupation of Palestine to a disagreement between Jews and Muslims (in complete disregard, for example, of the indigenous Palestinian Christians and the larger question of Palestinian self determination in the face of Israel’s illegal occupation). Secondly, ignoring, in the first place, the unlawfulness of Israeli checkpoints, Sexwale made an absurd suggestion that Israeli military actions at these checkpoints (which routinely include prevention of movement and the killing of Palestinians) are “mistakes.”

The FIFA Israel Palestine Monitoring Committee was appointed in 2015 but its concluding report has now been delayed four times (May ’16, Oct ’16, Jan ’17, May ’17) despite ample advice from human rights experts. FIFA Council’s insistence on continuing to pursue a wholly inappropriate and unlikely consensus on the issue of IFA-affiliated clubs in illegal settlements is an effective refusal to apply the dictates of FIFA’s own Statutes and of international law.