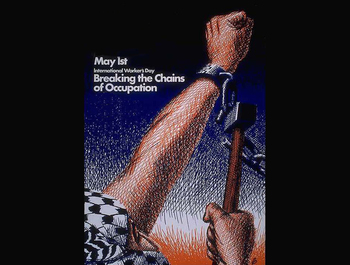 nc4psouthafrica2017-05-08T10:33:02+02:00
POLITICAL PRISONERS, POST
30 April 2017
Ahead of international Workers Day on May 1st, Palestinian trade unions have released a statement saluting workers worldwide as well as calling for an intensification of the BDS boycott of Israel and support for the #PalestinianPoliticalPrisoners on hunger strike . Their statement reads:
On May Day, we Palestinian trade unions are proud to stand with the trade union movement internationally as we collectively resist attacks on our working conditions, cuts to public services and job losses. We lend our voices to the mass rallies taking place internationally uniting trade unions, immigrants and refugees, social movements, and environmentalists fighting for a better future and dignified living.
We also remind the world that Palestinian workers continue to endure and resist Israel’s regime of occupation, settler-colonialism and apartheid on a daily basis, including resistance to Israel’s shameful prison system. We salute our political prisoners on hunger strike to protest Israel’s grave and ongoing violations of Palestinian human rights. We will continue to refuse Israel’s vision of a truncated network of Palestinian Bantustans and associated industrial zones, under which we relinquish our rights and become a pool of cheap labour for the Israeli state. That is why in July 2005, when over 170 Palestinian organizations urged the world to adopt a campaign of boycott, divestment, and sanctions (BDS) against Israel in the manner of South African Apartheid, this historical call was signed by all the main Palestinian trade union federations.
BDS principles and tactics have been formally endorsed by national trade union federations in South Africa, UK, Scotland, Ireland, Norway, Sweden, Belgium, the Basque Country, Brazil and other countries across Latin America, in addition to scores of national and local unions. This gives us great hope in the potential of working people to shut down corporate and state support for Israel’s crimes.
We look forward to working alongside trade unions around the world to develop and strengthen our struggles for human rights, social and economic justice. We stand shoulder to shoulder with working people worldwide and thank you for the solidarity you continue to show to the struggle for Palestinian workers’ rights. Click here to read the full message from Palestinian trade unions.
Representatives from the human rights and Palestine solidarity organization BDS South Africa will be delivering messages of support at various Worker Day rallies and marches tomorrow (Monday 01 May).
The struggles of people for justice and dignity are inter-connected and as BDS South Africa we salute the South African trade union movement and its members for their unflinching support for the Palestinian struggle and their commitment to the freedom of the Palestinians. Palestinian workers face the combined oppression of exploitation, immoral capitalism as well as state entrenched and legislated racism by the Israeli regime.
We acknowledge workers and the labour movement that built South Africa, often under unjust conditions, and we reaffirm our commitment to the current and future struggles of workers – in South Africa, Palestine and beyond!

ISSUED BY KWARA KEKANA ON BEHALF OF BDS SOUTH AFRICA