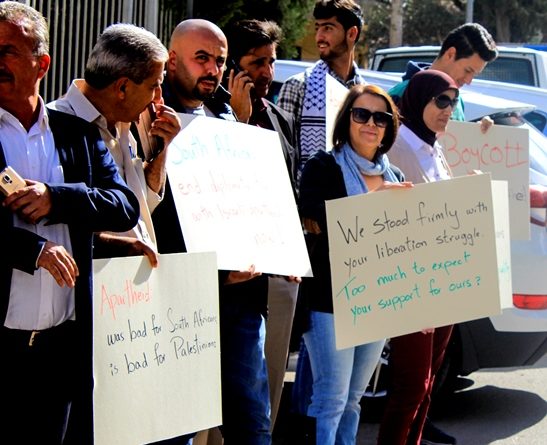 Yesterday (Monday 20 November 2017) Palestinians from various civil society organizations held a protest outside the SA Embassy in the West Bank Palestinian city of Ramallah. One protestor held a placard reading “We stood firmly with your liberation struggle, too much to expect your support for ours?”, another protestor held a poster reading “South Africa can’t support our struggle for self determination? Do no harm at least!”.

Among those protesting were representatives from the Palestinian Popular Struggle Coordination Committee, Stop The Wall as well as well known and respected Palestinian activists inculding Bassem al-Tamimi from Nabi Saleh, Munther Amira and Salah Khawaja who Ahmed Kathrada and the AKF had publicly backed when he was arrested by Israel late last year.

In a letter submitted to diplomats at the SA Representative office in Ramallah, the Palestinians listed four recent incidents of “betrayal” by South African officials. Their letter reads:

“We are protesting today…against recent acts of betrayal of this struggle by some South African government officials. We are confident that many of you, the people of South Africa, will agree with us that Palestinians deserve better from your current government. The Palestine Liberation Organization (PLO), the sole legitimate representative of the Palestinian people, was among the strongest and most reliable supporters of your own liberation struggle during the darkest era of apartheid, while Israel was the apartheid regime’s best friend.

Please consider the following four instances of your government’s undermining of our struggle and of its own principles of supporting human rights worldwide:

According to Israel’s Ministry of Foreign Affairs, a “pre-arranged inter-ministerial” meeting between Israel’s Minister of Regional Affairs, Tzachi Hanegbi, and the ANC’s International Relations Sub-Committee headed by South African Minister Edna Molewa has recently taken place. Hanegbi, an ardent advocate of war crimes against Palestinians, has recently threatened the Palestinian people with a “new Nakba,” referring to the premeditated ethnic cleansing of a majority of the indigenous Palestinians around 1948 to create a Jewish-majority settler colony in their homeland.  Hanegbi voted this past January in favor of a racist anti-African law, which sought to compel non-Jewish African refugees to self-deport by seizing their wages.Click here

South Africa’s Department of International Relations and Cooperation has recently given a gift on behalf of the South African people to the departing Israeli ambassador Arthur Lenk, ignoring the Israeli government’s  repeated vicious — and sometimes overtly racist — attacks on the African National Congress (ANC).  Click here

South Africa’s Ambassador to Tel Aviv Sisa Ngombane has publicly supported an Israeli organization promoting the Israeli military forces and spoken of “pressuring” the South African president and government “to send ministers to Israel.” Furthermore, he has infamously claimed that Israel was justified in its 2014 assault on Palestinians in the occupied and besieged Gaza strip, when more than 500 Palestinian children were massacred. Instead of recalling him, the South African government has extended Ngombane‟s term till the end of 2018.  Click here

The former South African Director General of International Relations and Cooperation and now SA Ambassador to the UN, Jerry Matjila, met in 2016 with his far-right Israeli counterpart in an attempt to normalize relations with the Israeli regime.” Click here

The Palestinian letter ends with an appeal to “immediately downgrade the South African Embassy in Tel Aviv to a liaison office” until Israel abides by international law. The downgrade, the Palestinians explain in their letter, “is a most basic gesture of ending complicity in Israel’s decades-old violations of [Palestinian] human, civic and national rights.” Click here to read the full letter submitted yesterday by Palestinians to the SA Embassy in Ramallah.

Subsequent to the protest in Ramallah, there will be picket hosted by various South African organizations at the Department of International Relations and Cooperation on Tuesday 28 November 2017 at 12h00 which will be addressed by, among others, YCL SA National Secretary Mluleki Dlelanga, ANC IR Provincial Officer Nomantu Ralehoko, COSATU Provincial Secretary Duminsa Dakile and SASCO Provincial Chairperson Luvuyo Barnes. Click here.

ISSUED BY KWARA KEKANA ON BEHALF OF BDS SOUTH AFRICA