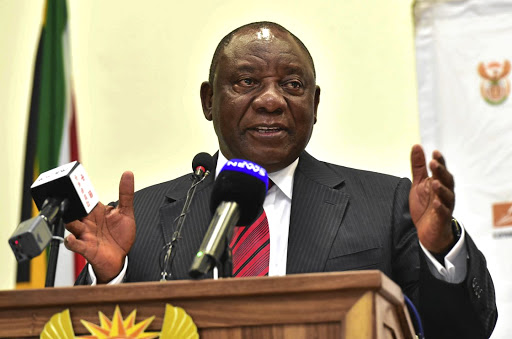 Press statement : Ramaphosa to go on hunger strike
12 May 2017

Deputy President of South Africa and the ANC, Cyril Ramaphosa, will go on a hunger strike on May 15 in support of Palestinian prisoners.

Ramaphosa, a former chairperson of the Ahmed Kathrada Foundation, has endorsed the #DignityStrikeSA campaign. It calls on South Africans to embark on a 24-hour hunger strike in solidarity with Palestinian prisoners, who have been on hunger strike since April 17.

The Deputy President will eat his last meal ahead of the solidarity hunger strike before 6pm on May 14. He will only be allowed to have salt water, which is what Palestinian prisoners have been surviving on for last 26 days, before ending the hunger strike at 6pm on May 15.

May 15 was symbolically selected for the #DignityStrikeSA campaign to mark the Nakba (Catastrophe) that saw Palestinians being forced to flee their homeland in 1948, and the establishment of Israeli occupation.

Neeshan Balton, the Director of the Ahmed Kathrada Foundation, said, “We welcome the endorsement by the Deputy President, and we hope that his actions will inspire other South Africans to follow suit and support the solidarity hunger strike. Ramaphosa’s commitment to the campaign sends a strong message that South Africa stands with the Palestinian people in their quest for freedom and dignity. His support is globally significant as he might possibly be the most senior politician endorsing the demands of the Palestinian prisoners.”

Kwara Kekana from BDS South Africa urged South Africans to continue pledging their support for the solidarity hunger strike by emailing their names and details to palestinianpoliticalprisoners@gmail.com . “We have been receiving tremendous support from a range of individuals, as can be seen from the growing list of ministers, deputy ministers and others. We’re encouraging ordinary South Africans to also make their pledges of support public by emailing us their names and bios, and sharing photos of themselves on social media with the words” ‘I support #DignityStrikeSA,’” Kekana said.