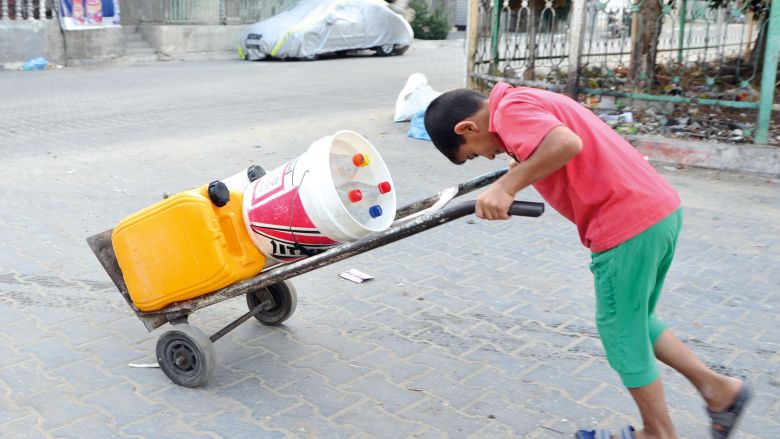 95 percent of Gaza’s water isn’t suitable for domestic use because of high levels of pollution and it being salinated.

In Jabalia Refugee Camp, north of Gaza, children and old women carrying plastic bottles gather near water taps to fill them with drinking water from a newly established artesian well set up by the municipality.

Dalal Awwad, an elderly Palestinian woman, who lives alone in a nearby house, says she regularly uses the well to get her daily supply of drinking water from the well.

“I have no children to help me and this is the main source of drinking water for me,” she tellsNewsweek Middle East.
As Awwad fills her flask, 6-year-old Abboud Masoud and his sister Noura, 8, stand with other children near the taps, waiting for their turn.

“We come here because it [water] is for free. We do not have clean water at home,” he says as he prepares to leave the place on his small bicycle, already loaded with water canisters.

Due to a decade-long Israeli blockade, nearly two million in the Gaza Strip are facing a water crisis that has impacted the quality and quantity of water in the small seaside geographical area of no more than 360 square kilometers.

Though international organizations have warned of the dire situation in Gaza due to water scarcity in the last few years, the situation seems to be worsening without any solution at hand.

To add to its woes, most of Gaza’s drinking water has become salty.

Monther Shoblaq, the director general of the Coastal Municipalities Water Utility, tellsNewsweek Middle East that “95 percent of Gaza’s water is not suitable for domestic use because of high pollution and salt levels.”

According to the World Health Organization (WHO), the percentage of chloride should not exceed 250 mg per liter. However, in Gaza, it is 1500 mg/L, Shoblaq tells Newsweek Middle East.

He adds that the nitrate concentration is also well above the WHO’s recommended 50mg/L.

“In Gaza it is 150mg/L. If the water situation does not change by 2020, Gaza will have no water for domestic use,” he adds.
Pollution, coupled with a high percentage of salt in Gaza’s water has caused fatal diseases among the local population.

“These factors are the main reason behind kidney diseases and urinary tract infection in Gaza,” Dr. Abdallah Al Qishawi, head of kidney and dialysis department at Shifa Hospital in Gaza, tellsNewsweek Middle East.

“Nitrate and chlorine cause kidney stones as well as inflammation, which leads to renal failure… and causes diseases among pregnant women and infants,” says Al Qishawi.

According to him, there are 550 patients on dialysis and around the same number suffer from chronic infections.

Shoblaq blames the Israel’s occupation of Gaza as the main reason behind the crisis, in addition to the public’s irresponsible behavior.

According to him, Israel has cut off transboundary resources by establishing reclamation wells and dams not far from Gaza’s underground water reservoirs. In doing so, Shoblaq says, Gaza loses between 10 to 20 million liters every year.

“Such procedures prevent the natural flow of water to Gaza… it is totally illegal and violates international laws,” he adds.

Despite an officially withdrawing from the Strip in 2006, Israel has continued to block Gaza’s land and maritime space.

Palestinians complain that before Israel’s withdrawal, it made sure to pollute the place for the besieged population.

“One of the main sources of pollution are the sewage pools established by Israel in two parts, south and north of Gaza… when it comes to water, the Israeli occupation left Gaza a dead body,” says Shoblaq. The Israeli blockade has also impacted the fauna and flora of the Strip, which further adds to the problem.

Rebhi Al Sheikh, the deputy head of the Palestinian Water Authority, says the Israelis have put a spoke in the wheels, be it on the ground or politically, hampering any effort to solve Gaza’s water crisis.

When asked to comment on the issue, the Israeli Army’s spokesperson refused to answerNewsweek Middle East’s questions.

“Israel provides Gaza with 10 Million Cubic meters of water per year, as well as assisting to develop the water infrastructures,” a spokesperson for Israel’s Coordination of Government Activities in the Palestinian territories, (COGAT) tells Newsweek Middle East.

“According to article 40 of the 1995 agreement [between Israel and the Palestinian Liberation Organization] Israel should allow the Palestinians to have an additional 70 to 80 million cubic meters of water per year, 5 million of it are for Gaza,” says Al Sheikh.

It is after 20 years of negotiations that, Israelis allowed the Palestinians to buy 5 million cubic meters.

“But we could not buy them in full because Israeli jet fighters destroyed the concrete water tank and other facilities during the last aggression [in 2014],” Al Sheikh tells Newsweek Middle East.

“In one of the projects, we lost about one year just waiting for the Israelis to say yes to the equipment,” he says.

But the Israelis refuse the entry of construction material inside Gaza, claiming that it may be used for terror-related reasons.

“The entry of dual use material which may be used for terror purposes, requires a security check to determine the destination and the use of the materials for civil purposes,” COGAT’s spokesperson said in an emailed reply to Newsweek Middle East.
Palestinians say the Israeli claims are absurd.

“Imagine, in one of the ongoing projects the Israelis asked us to change the contractor, which stopped work for several months,” Al Sheikh says.

He says that Gaza is in the process of building three short-term low volume seawater desalination plants to produce 13 million cubic meters per year.

That, in addition to the fact that damages and disturbances in the sewage network due to repeated Israeli aggressions, have caused sewage water to infiltrate the strip’s aquifer.

It is worth noting that the U.N. has declared 90 percent of Gaza’s water from the aquifer unsafe for drinking without treatment.
If the situation is not fixed, sea water will also completely infiltrate the aquifer, anticipates Al Sheikh.

Meanwhile, irresponsible behavior by the public is also threatening what is left of the water supply in Gaza.

Shoblaq says at least 4,000 illegal water wells have been established by Gazans and that constitutes a real depletion of the Strip’s natural sources.

“Lots of people have established resorts, chalets, and even illegal private artesian wells, and they cause the loss of 150,000 liters daily.”

Meanwhile, the majority of Gaza’s 1.8 million population continues to buy water from the private sector’s fresh water trucks, which get their supply from wells dug across the strip.

Assef Mousa, an owner of a truck selling fresh water says most of the people buy “filtered water” from trucks.

And the business is apparently doing really well, according to Mousa, who plans on expanding his business.
“I am thinking of buying a new truck. We have a lot of pressure on us. Our customers are increasing,” he adds with a smile.