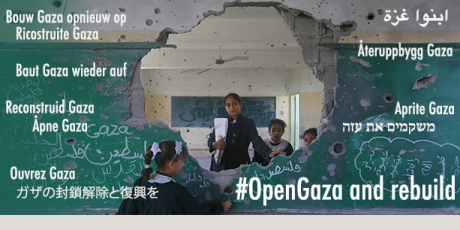 It’s time to increase our momentum – in the fall, world leaders are meeting to discuss next steps on Gaza. This is our chance to call on them to take action to ensure Gaza is completely rebuilt, and that the people of Gaza are treated with dignity.

Two years after the conflict, the blockade on Gaza is still imposed, only 30 % of aid pledges have been delivered, 90 % of the homes that were completely destroyed have not been fully rebuilt, and over 75,000 people are still without a home.

We can make a difference – the campaign began in August 2015, our joint pressure is succeeding in speeding up the amount of building materials that are allowed into Gaza. Most of the schools that were damaged in Gaza have now been rehabilitated. This shows what can be achieved, but there is still a long way to go.

The Israeli government continues to restrict basic and essential construction materials from entering Gaza. Only 10 % of the 11,000 homes that were bombed and destroyed have been fully rebuilt.

More than 75,000 Palestinians in Gaza are still homeless, hospitals still lie in ruins, and whole neighbourhoods have no access to running water.

Marking the two years since the outbreak of the 2014 conflict — we can help ensure homes and hope are rebuilt.

Our governments have already pledged to rebuild Gaza, and called on the government of Israel to lift the blockade. We can show them that people everywhere want urgent action to stop this injustice, the Israeli government must stop hindering reconstruction, so that families will be able to build homes and children will finally get their remaining schools back.

Sign the petition and share – almost 700,000 people already signed the petition – let’s get 1.1 million more voices for urgent action, one for each of the 1.8 million people living in Gaza.

Palestinian political parties have failed to reconcile and prioritise reconstruction, and Egypt’s closure of its border has further limited supplies entering Gaza. The principal obstacle to reconstruction is Israel’s blockade. While Israel justifies the restrictions on security grounds, the United Nations and the International Committee of the Red Cross have told Israel this blockade is a violation of international law.

By placing restrictions on the movement of people and goods, the blockade is punishing innocent civilians for acts for which they bear no responsibility. There can never be a justification for leaving families without a home and the sick without a hospital.

The media’s eyes are on Gaza right now, and that’ll make politicians more likely to act. Sign the urgent petition on the right — let’s demand our governments to move beyond statements, and ramp up diplomacy.

For further questions check out the Q&A page.